In 2004, when then-president Jacques Chirac of France presented the Meilleur Ouvrier de France (“Best Craftsman of France”) award to jeweler Nicolas Tourrel— whose flexible hand fan composed of white gold, platinum and bronze earned the jury’s vote as best entry—it was clear that things were going to change for the artist.

Given out only once every four years, the honor is the jewelry equivalent of a restaurant receiving three Michelin stars. It allowed Tourrel, who hails from the southern town of Albi, the birthplace of painter Henri de Toulouse-Lautrec, to publicly display the emblem at his boutique. Not surprisingly, it also brought him heaps of attention.

Now, after having opened an additional workshop in Lyon to accommodate the surge in demand for his signed pieces, Tourrel talks to us about his experimental design process, his love of rubies and a rather intimate customer request.

The first piece of jewelry I ever made was: A cluster ring in 18-karat gold and diamonds. The kind of customer request I’ll never tire of hearing: Putting a new twist to calibrated colored stone rings. Design cliché I love: The concept of using modular design to create flexibility and flow. My favorite gemstone: Ruby. My favorite design era: Art Deco. My favorite living designer: Lorenz Bäumer, Place Vendôme, Paris. One unusual detail about my design process: I call it “evolutionary modulation,” or the use of experimental design revolving around movement. Between one pigeon blood Burmese ruby or a half dozen D flawless diamonds, I would rather have: The ruby. The craziest thing I have ever done for a client: I made an 18-karat gold bra. The cups were set with diamonds and the nipples were 1-carat diamonds each; the straps and the fastener were made of 18-karat gold chain. It was made to measure. When I create a new collection: I wonder if my creation will give pleasure to the woman wearing it. If I were a city, I would be: Barcelona. The jewelryrelated job I would least like to have: To create a concept on a computer. While designing, my mind usually wanders to: Butterflies and other creatures that fly carefree through the air. 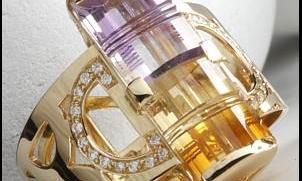 After a long and difficult quest for the best quality for more than 20 years, Nicolas Tourrel has acquired a prestigious image of trust and (...)
FOR MORE

Nicolas Bos, the President and CEO of Van Cleef & Arpels, was appointed head of the Parisian jeweller in 2013. Over the years, he has established a (...)

This collection illustrates Cartier’s ability to both admire and further enhance beauty through design, tension of line’s, geometry and abstraction. The (...)

Audemars Piguet presents a new limited edition 34 mm Royal Oak Selfwinding in black ceramic. This timepiece is the fruit of the latest collaboration (...)

The theme of this year’s competition is: “Welcome to the Roaring Twenties.” The competition is open to all jewelry and gemstone designers as well as gold- and (...)

An introduction to the élégante by F.P.Journe 12 rows of diamonds

F.P.Journe presents the élégante 12 rows of diamonds watch, on a 40 mm case, with new set bracelets. These new versions reflect the know-how of the (...)

The latest creations amplify the dualities within Cartier’s codes, playing with duplication and textural counterparts to create a visual language of rhythm (...)