Debusigne: a bridge between two worlds


Swiss jeweller Aline Debusigne is passionate about ancient history, which is reflected in her creations that create a breathtaking bridge between different eras.

Debusigne: a bridge between two worlds

Swiss jeweller Aline Debusigne is passionate about ancient history, which is reflected in her creations that create a breathtaking bridge between different eras.
A

line Debusigne expresses herself in a soft voice: she would gladly let her jewels speak for her if they could. Actually, looking at them, you can tell a lot about her love for old diamonds, antique jewellery and creations that go beyond simple ornamentation. The Basel-based jeweller studied ancient history and philology before deciding to make jewellery her profession, launching her own brand, Debusigne, in 2018.

Her designs are contemporary, but with a discreet nod to Antiquity: they oscillate subtly between past and present. “Antique jewellery has always been part of my life,” she says. “My taste lies somewhere between the end of the 19th century and the beginning of Art Deco, when more contemporary geometric lines began to be explored.” It is hardly surprising to learn that her Danish-born mother wore late-19th-century sleeper earrings and 1930s rings given to her by her father. It’s a kind of atavism.

Aline Debusigne expresses herself in a soft voice: she would gladly let her jewels speak for her if they could. 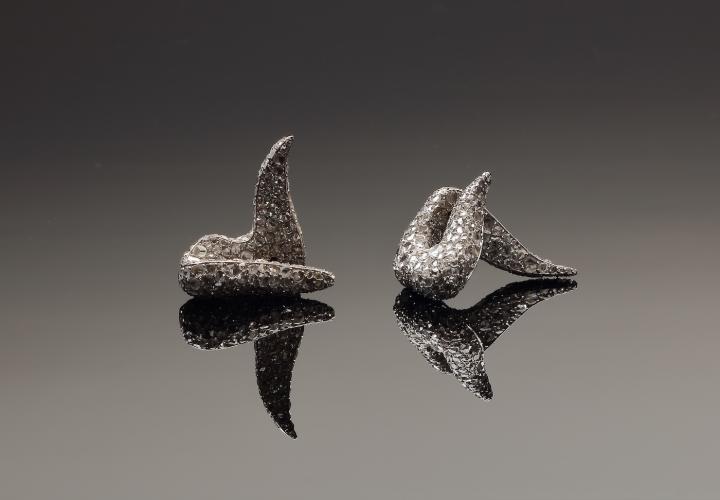 She designs all her own creations, which are then handmade by others in highly specialised workshops in Geneva and Paris. “I chose them because they have experience with antique jewellery,” Aline Debusigne explains. She has a particular taste for old-cut diamonds, which have fewer facets than modern cuts and are often neglected by other professionals. In the beginning, she bought old brooches and dismantled them to recover the stones. But only 10% of them lived up to her expectations, so she turned to specialist suppliers. 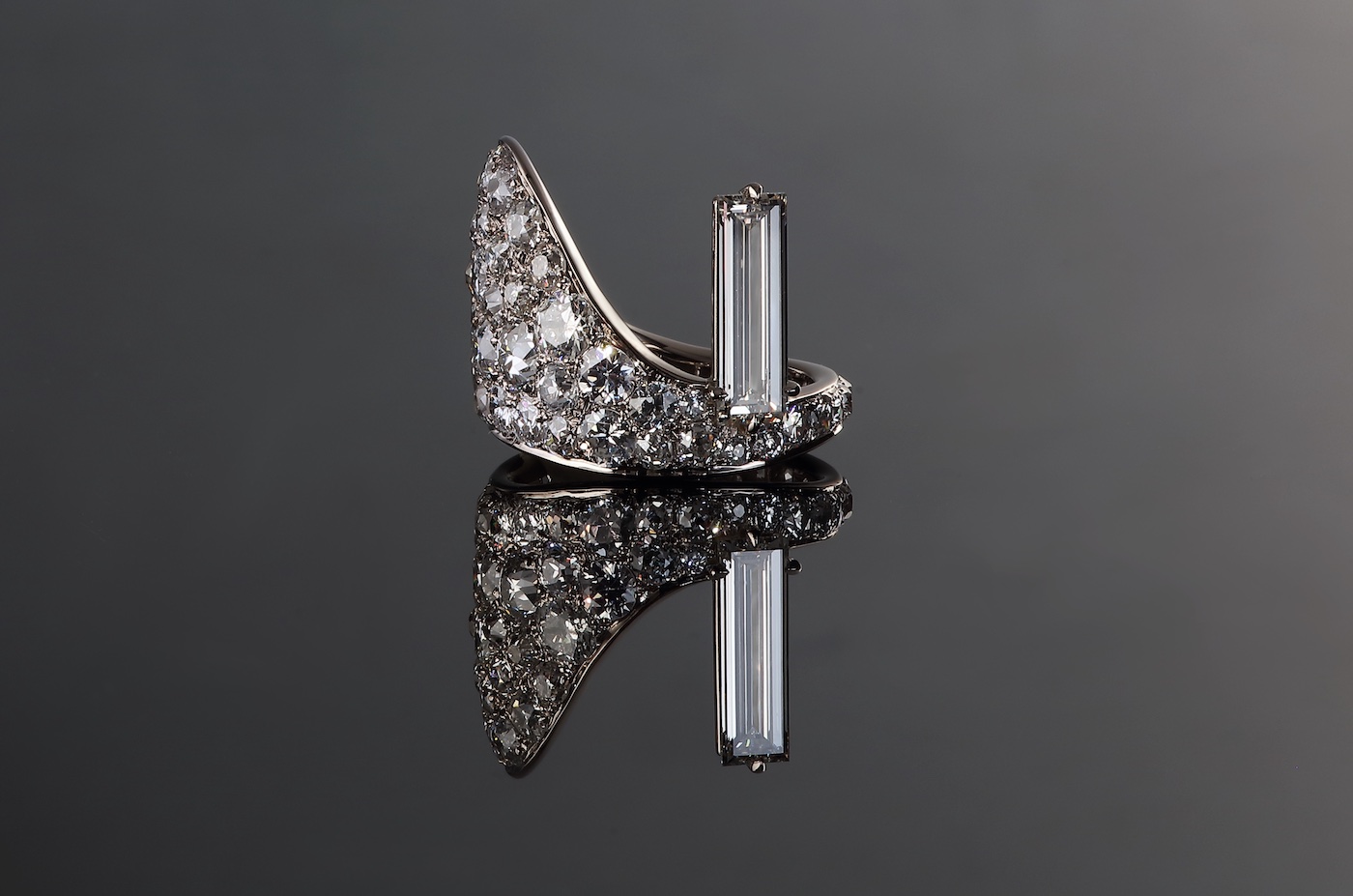 The designer likes to let the stones express their own “fire” within a setting that doesn’t steal all the light. This probably explains why she likes the natural appearance of white gold, without rhodium plating, which leaves the diamonds to shine. “Depending on the light, the metal changes colour and takes on warmer hues.”

The designer has a particular taste for old-cut diamonds, which have fewer facets than modern cuts and are often neglected by other professionals. 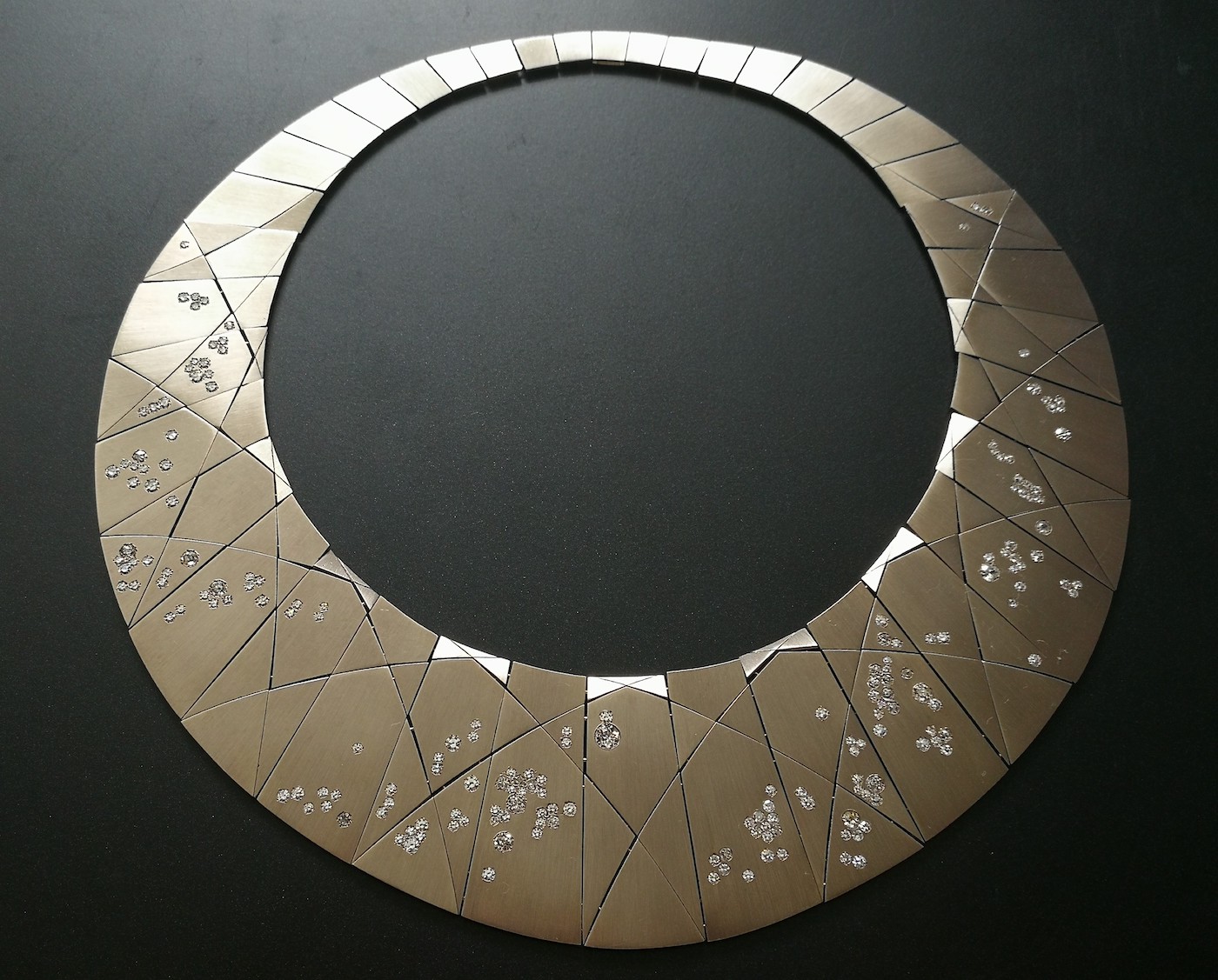 Her plastron necklace, for example, is a marvel of architecture: it sits like an Egyptian pectoral on the chest and, because it is fully articulated, moves with the wearer’s body. It is almost invisibly set with brilliant-cut diamonds that look as if they have been thrown haphazardly onto the piece (in fact, they were meticulously placed), creating the effect of a scattering of stars. The creation is like a precious piece of armour. Another jewel, a ring that resembles a mini-tiara with a brown diamond, was inspired by the shuttles in the latest Star Wars film. With Debusigne, past, present and future are intertwined. PColoured gems are growing in popularity and importance. They grant a piece of jewellery character and demonstrate individuality, personality and style. (...)

The new chapter of the brand’s high jewellery collection, “Botanica: Blue Book 2022”, introduces new creations that draw from its heritage of floral-inspired (...)

A review of the 30th edition of JCK in Las Vegas

Operated by RX, the show successfully wrapped its 2022 edition, exceeding pre-pandemic 2019 attendance numbers and reuniting the jewellery industry to (...)

Bulgari Eden The Garden of Wonders

This High Jewellery and Watches collection includes for the first time in the Bulgari history more than 30 creations dedicated to the emerald. This (...)

The Lebanese designer has a unique approach to jewellery. Everything she creates is the result of philosophical reflection. For her latest collection, she (...)

Atelier Allure: in praise of shadows

The Austrian jeweller and goldsmith Thomas Hauser is a contemporary alchemist who has developed his own alloy, called Niellium, to craft the jewellery of (...)